This version of picochess completes what i began with v0.85. Its called “Datatables”. The former version had this Datatables already in the book-database view. Now, its also part of the game-database view on bottom of the webserver display. Despite the folding feature (see below picture), you can now order (including multi ordering with “shift” key) things which wasn’t working very well before.

Another big change is that computer moves are now no longer done on the webserver board as soon as picochess put them on the electronic clock. This is a work-in-progress of sync the webserver display with the real DGT e-Board. So, it displays now what you should move and clears the highlights when you really moved it on the DGT board. This also makes it similar to the Revelation II. In this area (=sync) more to come in future releases.

Lastly i want to talk about abit with this “webserver integrated console mode”. Here is a picture, when you click on “console”. It will hide the game database and shows you something similar to the old text only version of a console. 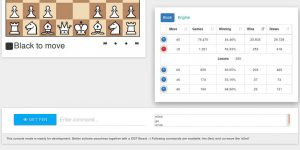 As it is noted, this console mode is mainly for a developer. But perhaps you want to use picochess without having a DGT board connected. Then this mode is your friend 😉 Again: You don’t need this for standard use of picochess! But here is a short description: