This is the final part of the history. From now on i gonna write detailed articles about each version. These versions mainly deal with making the DGTPi clock ready for sale.

This version allows the user to fine adjust the engines level. Before if the engine provided an ELO range, that was not directly supported and internally switched to levels 0 to 20. This version now let the user directly select what the engines supports. For the provided engine “Rodent II” that has some new functions: You can select the “personalities”. All this is shown on your DGT clock.

DGT came up with the wish that user settings (like favourite time, book, engine) should be safed to the SDCard and reloaded when the user turns the clock on again. Well, that is a great feature and therefore it is implemented in this version. Also, i worked on not connected eBoards & clocks to make it even more user friendly.

picochess also has a webserver interface from almost the beginning. But this interface was no longer modern. It was for example lacking of responsive design. So, i took several weeks to update that to a new User Interface (UI). What you can do with this webserver, i will also tell you in a detailed article lateron. Here is an example of the new UI style: 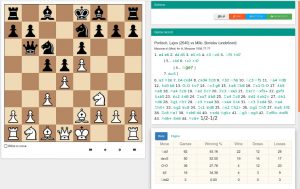 Despite this i also implemented an update to the UCI960 mode (Fischer Random Chess). Before you had to use the “Position” menu to enter an uci960 game. Now, you can just place the pieces in one of the 960 start positions and picochess will answer that with “new game” plus its standard game number. Find more about Chess960 at wikipedia

Since we released picochess together with the rodent II engine there were a bug preventing it to make this “Personalities” to work correctly. That is now fixed. Its really fun to play with it. For test, i create one personality where a queens value is abit more as a pawn. It really plays weired then. But for serious playing, you should keep with the provided personalities.

This version is also the version running on the sold DGTPi’s available since Okt 2016. Even we further develop new features you can still update your buyed clocks. You never need to have an old version. But if you not experienced with linux, its perhaps a good idea to wait for DGT to send out new SDCards with a proved picochess version.