The positive things about it:

For the moment thats all…I’ll write more about this Revelation II chess computer lateron. Last but not least, i want to show you a picture Al shot from his Revelation 2 at home. Its really cool..and running the picochess v0.75. Btw. the pieces are from best-men-ever. They make this Revelation even better…but judge yourself: 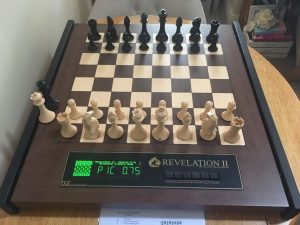